Editor’s note: I realize it may seem odd to you that we are exploring the topic of evil and Satan the same month we look forward to celebrating the birth of Jesus Christ. Odd as it may be, it is actually quite relevant to the celebration of Jesus’ birth. He had to come into the world in order to defeat Satan (1 John 3:8). Without Christ’s death on the cross we would have no escape from the grip of Satan and would, because of our sinful state, spend eternity in hell (more on this next Friday). I mentioned this last week, as Christians we are thankful that God has chosen us and has saved us. Amen! 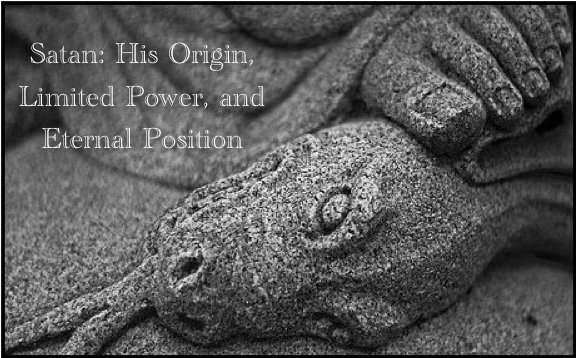 God and Satan are two beings that humans, believers and nonbelievers alike, are subject to in one form or another. Because of this, it is wise for the individual to know exactly who these two are and what they can and cannot do, particularly Satan.

There is a belief that says there are two “[mutual]…forces or beings”.[1] One has created, and is, good, and the other has created, and is, evil. This belief teaches that the universe is the “battleground for these opposing beings”[2] and is known as religious dualism.
This belief of God and Satan as mutual beings is quite contrary to what Scripture teaches. Scripture is very clear that one of the beings was before the other: “In the beginning, God created the heavens and the earth” (Genesis 1:1, ESV). Since God was before Satan, the two are not mutual, and since they are not mutual one will defeat the other (Gen. 3:15).
There are two other passages that clearly speak against this belief of eternal conflict between God and Satan. On the day that Lucifer was created, (Ezekiel 28:13) he was the “signet of perfection, full of wisdom and perfect in beauty” (v. 12). He was even blameless in his ways (v. 15). Because his “heart was proud” (v. 17), God cast him to the ground (vv. 16-17; Is. 14:12; Luke 10:18). The destiny of Satan is stated in Genesis 3:15, and is carried out through the death of Christ on the cross (John 12:31-33).

A common objection to using Isaiah 14:12-17 and Ezekiel 28 as reference to Satan’s origin and destiny, is that they are not speaking to or are about Satan, but instead are about their respective earthly kings and kingdoms. This is simply not the case. As seen in Matthew 16:21-23 when Peter is rebuked by Jesus for being under control of Satan, Satan is able to use people to accomplish his goals. This being understood, the passages at hand speak to both Satan and those he is using as his earthly pawns.
It is easy to fall into the trap that God created evil through his creation of Lucifer. Again, it is observed that Lucifer was created (Ezekiel 28:15) by God (Gen. 1:1) as a blameless (Ezekiel 28:15) “guardian cherub” (v. 14). He was also created with free will, as can be witnessed in verse 17: “you corrupted”. If he was created without a free will he would not have been able to alter the blameless state of which he was created.
It is beneficial to observe what Satan is not to further demonstrate that he is, as a created being, subservient to God. First, he is not omniscient. Satan believed that Job would curse God if he lost all that he had (Job 1:11). If Satan was omniscient he would have known what Job would or would not do. Second, Satan is not omnipotent. If he was, he would have been able to do two things. First, he would have been able to go against God’s command to not take the life of Job (2:6). Second, Satan would have been able to push Job to the point of cursing God. Finally, Satan is not omnipresent. Using Job as an example, Satan is seen to be wandering the face of the earth (1:7; 2:2). His presence does not fill the earth, but he is left to having the presence like that of a human being, which is limited.
God is all three things that Satan is not (Omniscient – Ps. 147:5; omnipotent – Matt. 19:26; omnipresent – Ps. 139:7-10). This alone makes Satan subservient to Him (because he is thus not equal with God). Also, it is obvious to note that Satan was not allowed to touch Job or his processions without permission from God to do so (Job 1:12; 2:6).
If someone is tempted, they can place the blame on Satan who tempts them. It is when an individual yields to temptation and commits sin that they cannot blame Satan. Eve took the fruit with her own hands, and Adam with his (Gen. 3:6). The serpent did not force the fruit into their stomachs, they took and ate of their own will. It is the same for every human since the Fall (Rom. 3:23).
It is fitting to conclude with an encouragement. Although the tempter “prowls around like a roaring lion, seeking someone to devour” (1 Peter 5:8), those in Christ have One who is ready at their defense and who is greater than the one who tempts them, and if they call on Him (v. 7), He will deliver them (v. 10).
END_OF_DOCUMENT_TOKEN_TO_BE_REPLACED